What is Ikebana, you may ask? The history of Ikebana, the Japanese art of flower arrangement, dates back 600 years and focuses on simplicity, asymmetrical beauty and seasonal materials.

The emphasis on the Japanese aesthetic of “empty” space distinguishes Ikebana from flower arranging practiced in other parts of the world.

Young Emirati, Ms. Amani Alshehhi, is the first United Arab Emirates national to obtain the certification of a certified Instructor from the Ohara School of Ikebana, Japan. 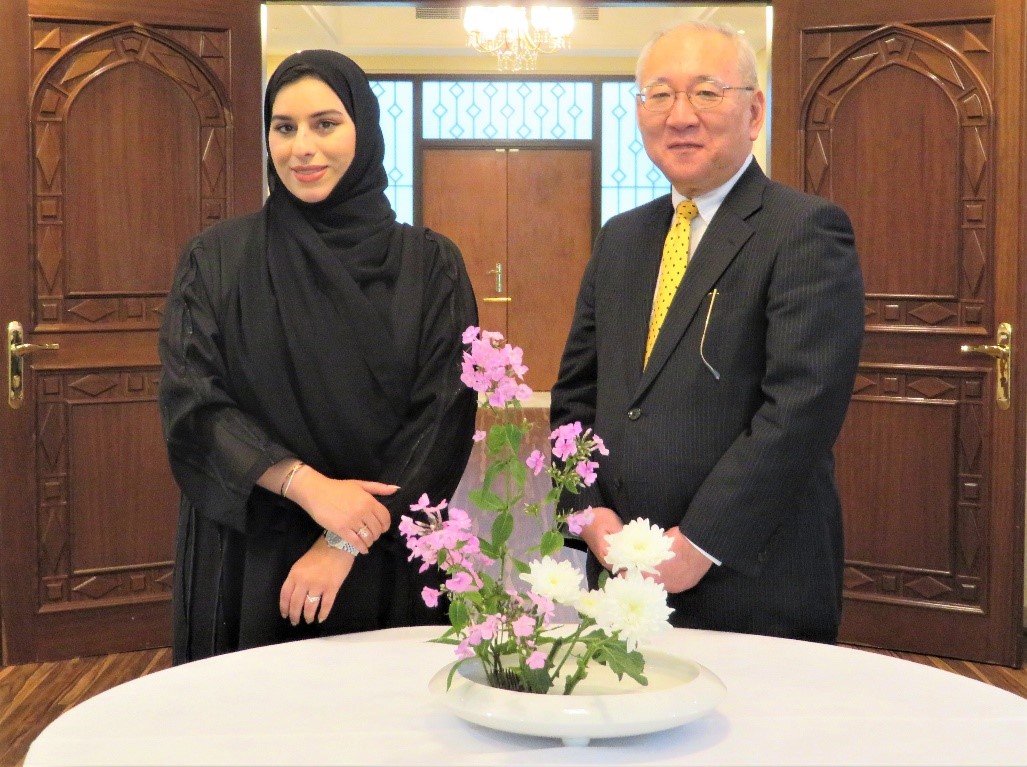 Being captivated by Japanese Kimonos, she developed a fascination with the culture. She furthered her appreciation of Japanese aesthetics by joining The Japan Club at Zayed University and gaining more hands-on experience of various different aspects of Japanese culture, including Ikebana.

Alshehhi began studying with the official Ohara School of Ikebana in 2015 and completed over 120 classes. Her skills were demonstrated when she contributed to the special Ikebana arrangements at the national reception hosted by the Japanese Embassy on the occasion of the Emperor’s birthday in 2018 and 2020.

There is a long-standing tradition in Japanese artistic practices that students become certified by their own Master in the craft, and Alshehhi has been certified by her own instructor and received the Ikebana name Misaki (美咲) which means “beautiful bloom”.

Classes at the Ohara School in the UAE are conducted by official Second Master of Ikebana, Harue Oki, in both Dubai and Abu Dhabi.

Ikebana, also known in Japanese as kadō or “the way of the flower”, is one of the practices considered to be a Japanese “dō”, meaning “path” or “way of living”. Others include sadō, the way of tea, and shodō, the way of calligraphy, as well as the popular martial art, judō.

These practices are a fundamental part of Japanese artistic culture, derived from Zen Buddhism and guiding the Japanese aesthetic sense and character.

On 29th July, the Ambassador of Japan, H.H. Akihiko Nakajima, personally congratulated Alshehhi for her achievement and for being a “cultural bridge” between the UAE and Japan, as well as showing encouragement for her to continue studying the Japanese traditional art which can involve lifelong learning.

In 2022, Japan and the UAE will celebrate the 50th anniversary of establishing diplomatic relations. Both countries will conduct a variety of collaborative events to celebrate their shared accomplishments and build opportunities for further cooperation